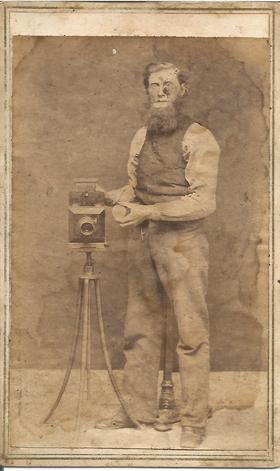 Mankind’s wish to record an accurate lasting image of what he sees with his eyes has endured since the beginning of time. Early attempts range from pre-historic cave drawings through paintings of the renaissance masters. But it isn’t until the 19th century introduction of cameras and photography that the original wish becomes a reality.

After attempts by many early inventors to construct a workable camera, it is the Frenchman, Louis Daguerre (1787-1851), who finally arrives at a practical solution. His camera is a boxy affair, with an aperture (opening) on the front end allowing a stream of parallel light beams to flow inward through a convex (bowed outward) glass lens. The lens bends the beams until they converge at a focal point at the camera’s back.

Once there, the convergent light strikes a plate – originally silver and later glass – that has been carefully polished and coated with silver iodide. Then a chemically induced miracle occurs when the plate is removed in a dark room, exposed to a vapor of mercury and immersed in a sodium solution that “fixes” a photograph.

For the first time, what the eye can see is captured, via this “light writing” process, on a permanent plate, for framing on a mantelpiece or collection in an album. As such, mortal man is able to record his time on earth for future generations to come.

In 1838 Daguerre takes the first photograph that captures people leading their daily lives, in this case Parisians strolling along the Knight’s Templars Boulevard. Given the long exposure times required to fix images on the plate, those in the crowd who are moving, appear in a blur – a problem that will be addressed by moving shots of people to indoor studios, where they will stand still before the camera for minutes at a time.

The immediate and immense popularity of the initial “daguerreotypes” produce a rush of improvements in early photography.

Daguerre’s silver plates are tricky to handle and result in a reversed image whose shininess is often distracting to the eye. They are initially replaced by two new options:

* Ambrotypes. These utilize glass plates, treated with iodized collodion, and backed by black varnish which creates a rich positive image for viewers.
* Tintypes. These are a variant of the ambrotype replacing the glass plate with one made from tin, lacquered on the back to again produce a positive image.

Then comes the Carte de Visite, a technical breakthrough that revolutionizes the art.

In 1853, John Adams Whipple of Boston, demonstrates that the negative image fixed on a glass plate can be

nitrite --  the result being a sharp, positive photograph.

When affixed to a sturdy cardboard mount, the result matches the earlier formats in quality, but at a sharply

reduced price.  Better yet, the same image can be transferred over and over again from the same plate,

allowing sitters to often buy a dozen copies for a single dollar.

The camera itself is also undergoing important refinements. Another Frenchman, Andre Disderi, creates

a box with eight lenses, so that eight identical images can be captured simultaneously on the one glass

plate being exposed. This greatly facilitates production of copies. Likewise, by varying the distances

between the camera and the sitter, “blow-up shots” become available.

By 1858 or so, the Carte de Visite becomes the dominant photographic format, worldwide, and it will endure

until early in the 20th Century and the appearance of Kodak’s personal camera.

The photography craze in America begins in 1844 when Mathew Brady learns the process, opens

a studio in New York, and begins to publish photographs of the many famous people who flock to his studio.

acquaintances. The urgency of this accelerates greatly when the American Civil War breaks out in 1861, and

those about to go off to the fighting regard these CDV’s as a path to preserving their likeness in case of future tragedy.

Throughout the period, photographers open studios in small towns and large cities, shooting everything in sight and

“branding” their artwork with personalized stamps appearing on the back of the 2.5x4.0 inch cardboard mounts bearing the  images. Along the way they create a documentary of the people and places and events that shape America’s first century as a nation.

At this point, you should be ready to enter the Photographic Book of our website.

Your visit will give you a chance to look first-hand at several thousand of these original 19th century Carte de Visite, from a collection which began in 1986. Some photos are pristine; others exhibit the wear and tear of time and handling. Many have been published before; others have not. Each is accompanied by a brief description and possibly a footnote, signaling that more details are provided in an appendix.

To facilitate your visit, the collection is grouped into topical areas of interest. Thus a simple click on a photo heading will transport you to a range photos: presidents and politicians, tycoons and common men and women, clergymen, abolitionists and suffragettes, slaves and free blacks, their towns and cities and homes and churches, how they made their livings, their education and entertainment, what they saw with their own eyes captured in the “light writing” of cameramen like Mathew Brady.

Those particularly interested in the American Civil War will also find one of the largest photo collections ever assembled of  soldiers, both Union and Confederate.