Wilmot’s stated rationale for this proviso has nothing to do with reversing the plight of the blacks; rather, as he says, the intent lies in preserving the “dignity of white labor” that would be eroded by the further spread of “free slave labor.”

When the Mexican War ends in 1848, it represents a triumph for America and a prelude to disaster.

Wilmot’s Proviso continues to hang like a sword of Damocles over Washington, with more and more public policy votes being cast along North-South sectional lines, rather than traditional Whig-Democrat party lines.

The fate of slavery in the Mexican Cession lands comes to dominate public debate on the floor of congress and in townhall meetings across the states. The spector of secession is transformed from idle threat to genuine possibility.

With the great political triumperate of Clay, Calhoun and Webster vanishing from the scene, a next generation of leaders search for new compromises to hold the Union together. But their efforts are too little and too late. Suddenly the center cannot hold.

The Compromise of 1850 sends slave catchers into northern cities, further exacerbating ill will. The Kansas-Nebraska Bill of 1854 upsets the long-standing 1828 Missouri Compromise lines of geographical demarcation and ramps up sectional discord in Washington.

As frustration over the issue grows, so too does violence.

First in the Kansas Territory in mid-1854, where armed bands of settlers clash over whether the state constitution will allow or ban blacks from its borders. Atrocities follow on both sides until U.S. troops are sent in to restore order.

Next in congress, as angry rhetoric in both chambers turns into physical attacks. In 1856 a South Carolinian, Preston Brooks, nearly canes to death the Massachusett’s abolitionist, Charles Sumner, who is sitting at his desk in the Senate. This assault turns Brooks into a hero across the South, while further convincing the North that members of “the Slavocracy” have veered out of control in trying to again impose their will on the majority.

Not even a landmark Supreme Court ruling in 1857 can resolve the turmoil over the further expansion of slavery. The Dred Scott decision is a total victory for the South. It states that the Constitution declares slaves to be “property,” which their masters can transport anywhere they wish without fear of judicial restraints. Hearing this judgment, however, the North simply chooses to ignore it.

More violence ensues, this time in 1858 at the military arsenal in Harper’s Ferry, Virginia, where Colonel Robert E. Lee is called upon to put down a raid by John Brown and his small band of black and white revolutionaries, armed with muskets and pikes on behalf of abolition. The Brown raid links abolition with terrorism in the minds of Southerners and forces them to again wonder if the 5.5 million whites in the region will still be able to control their 3.5 million slaves.

The rancor now leads to the collapse of America’s two long-standing political parties. A new “Republican Party” emerges from the ashes of the old Whigs and a faction which morphs from “No-Nothings/American Nativists” into “Free Soilers.” The Republicans nominate Abraham Lincoln for the presidency in 1860 on a platform that is unequivocally opposed to allowing slavery (and blacks) to spread into the new west.

The rise of the Free Soilers and Republicans also rings the death knell for the old Democratic Party coalition which has controlled the White House, with few exceptions, since the 1828 election of Andrew Jackson. Three distinct wings materialize: Northern Democrats who back Stephen A. Douglass in 1860; States Rights Southerners who favor secession and John Breckinridge; and largely border state Unionists, who support John Bell and another wished-for compromise.

The final die is cast against the Union when Lincoln wins the 1860 election – with only 39% of the popular vote – and heads off to the capitol hoping to succeed in restoring domestic tranquility and common purpose, after the disastrous terms of his two predecessors, Pierce and Buchanan.

However, by the time Lincoln arrives and is sworn in on March 4, 1861, seven southern states have officially left the Union. Four others, including Virginia, will follow the opening attack of April 12 at Fort Sumter. And “then the war came” as the president will later proclaim.

But was the war inevitable and why exactly was it fought?

Its inevitability seems obvious. The Founding Fathers in the 1787 Philadelphia convention looked away from the explosive slavery question in favor of creating a remarkable Union that was nevertheless a “house divided” from its inception.

The root cause of the South’s readiness to fight the war also seem quite obvious. It lies in economic necessity. For the South to prosper, its one industry – selling cotton and bred slaves – must be allowed to expand to the west.

But what about the North? Why does it go to war?

Was it, as some would argue, because Northern whites finally recognized their duty to free enslaved blacks and welcome them into their society? Was it simply to enforce the 1787 contract, to force the South to remain in the Union?

The former explanation is far too idealistic and the latter is far too legalistic.

Instead, the North is motivated to arms by four factors:

Finally the North goes to war for one other very practical reason. It is convinced that, if the South were left free to secede from the Union, it will simply ignore the wishes of the Northerners and move its slaves throughout the west.

All of these factors come into play on April 12, 1861, in Charleston harbor, when South Carolina asserts its right as a sovereign state to forcefully wrest control of Ft. Sumter from the federal troops on duty there.

The second shot heard round the world. A second revolution, as Antebellum America gives way to another contest of arms.

Most certainly a war to end all wars in America?

From 1861 to 1865 the war between the states raged across the American landscape, pitting brother against brother, killing some 750,000 people (2.5% of the population), and nearly ending the idealistic experiment in democracy that was forged in 1776.

Most people today believe that the war was fought to “abolish slavery,” and to deliver on the high-minded promise that “all men are created equal.”

But this belief has almost nothing in common with what really happened.

In 1861 the only white Americans who wanted anything to do with African slaves were a very narrow set of idealistic northern “abolitionists,” men like Lloyd Garrison, who were typically scorned by their neighbors for trying to impose the South’s problem – how to deal with its uncivilizable and violent blacks – on the rest of the nation.

To understand the average Northerner’s view of race, one need only look at the fact that “ethnic cleansing” had already progressed to the point where blacks comprised only 1.5% of their local population, with the majority penned together in segregated big city ghettos. On top of that, the original Constitutions from Indiana to Illinois, Kansas, Oregon and California, written in the 1850’s, all follow their proud affirmation as “free states” with a ban prohibiting all people of color from settling within their borders! 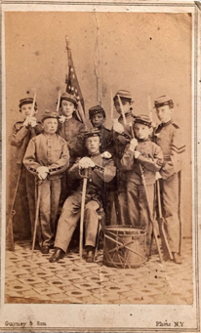 Be you slave or freedman, the message from the North was firmly racist in character -- “blacks stay out. (And this message held until the “great migration” began in 1915 as white American soldiers headed over there for WWI and millions of blacks escaped their Jim Crow fetters in the South for vacated job opportunities up North.)

In 1861 even Abraham Lincoln, destined to become “the great emancipator,” was baffled by how to resolve the issue of slavery.

He knew intuitively that it was morally wrong. But, despite all the remarkable strides toward equality made by the likes of Fred Douglass and other leaders in black churches and communities,  he was also certain that the Africans could never be assimilated into American society.  Which meant that justice for them lay in being repatriated to Liberia once slavery withered away. This was Lincoln’s answer when he first entered the White House.

But if the Civil War was not about freeing the slaves, then why was it fought?

Beyond race issues, economic conflicts play an important role . Thus by 1861 it is clear that the principles driving Southern prosperity are opposed by the majority of Americans, who happen by then to be living by in the North.

The Southern economy is ever true to their founder, Thomas Jefferson. Under his agrarian vision, the path to a booming South hinges on geographic expansion – whereby its two major crops – white cotton and black slaves – take hold on new plantations from Alabama to California,

To make this happen, the men of the South focus on extending America’s frontiers west of the Mississippi River, into the Louisiana lands acquired by Jefferson in 1803, and the vast territory to the Pacific, claimed originally by Spain and now owned by Mexico, since their 1821 independence.

America’s move onto Mexican land proceeds in stages, first peacefully, with American settlers immigrating into Tejas Province by 1822, then, aggressively, with tensions mounting. The 1836 Battle of the Alamo leads on to the 1845 Annexation of Texas and the 1846 invasion by US troops along the Rio Grande, sparking the Mexican-American War.

Along with these new western lands, the South anticipates windfall growth in demand for cotton and slaves, as far as the eye could see.

All that’s needed is the North’s congressional agreement to extend slavery, and hence cotton plantations, into the new western territories.

At first this seems simple enough.

The South is forever convinced that the 1787 Constitution guarantees the right to transport their “slave property” anywhere they wish.

Even when this right has encountered resistance in the past, certain “compromises” are always  worked out with the North in the interest of the Union. The most obvious of these being the Missouri Compromise line of 1828, making 36’30” latitude (the southern boundary of Missouri) the north-south divide between free and slave territory.

Surely, the South assumes, some comparable compromise will materialize once the Mexican War is funded and fought out, and the land becomes American soil.

Only this time, in 1846, the North is unwilling to go along.

The reasons are multi-faceted and have evolved over decades. In the end, however, the majority of American citizens, who now reside north of the 30’36” line, simply conclude that the South’s economic necessities conflict with their self interest.

This message is delivered by first year congressman  David Wilmot of Pennsylvania, who attaches a “proviso” to President Polk’s request for funding to fight the war. It proposes that the money be granted but only if…