The Lott family migrates from Holland to New York around 1630. At the time, slave ownership is widespread among the Dutch, with blacks originally comprising about 20% of the state’s population. In New York City over half of all residents own at least one slave, and the Lott family owns twelve, according to the 1790 census records.

At some point, Henry Lott comes to own the slave Abraham, while Eliza owns Fannie.

And at some point, Abraham weds Fanny, and they have at least one child, a daughter, Fannie Lew, who is owned by Elsie (Ray) Lott.

When slavery finally withers away around 1830 in New York, Abraham and Fanny transition from slaves to “coloured servants” of Henry and Eliza.

A trip into New York City by Eliza probably prompts the photographs above, taken by Fredericks & O’Neill of 5th Avenue, of an aging “Old Fanny,” standing beside the seated “Lizzie.” By the time it is taken, “Uncle Abraham,” whose photo originates at Isley’s Studio in Jersey City, has presumably passed away.

The Lott property remains a NYC landmark to this day, and restoration work shows that the slave quarters were well hidden within the building through a trap door in the kitchen. Artifacts found in this space include candle drippings, a mortared-over oven, a cloth pouch, oyster shell and corncobs, the latter arranged in a starburst pattern suggesting that they were used as part of West African religious rituals.

Conjecture also has it that a secret 6’x12’ room concealed behind a closet on the second floor of the Lott house may have been used in the 1840’s by run-away slaves moving north along the Underground Railroad.

Over 150 years have passed since Aunt Lizzie and “Old Fanny” posed for the camera, on their visit to NYC. But there they are, captured in time, forever symbolizing a limbo-like moment where some black people in America were no longer slaves, but not yet all the way free and equal.

While this photograph is taken after emancipation, it nevertheless captures the racist overtones toward blacks prevalent among both Southern and Northern whites across the antebellum era and beyond.

In the case of black males, the overtones center on fear – the shared belief that violent African men, “rampagers” such as Denmark Vesey and Nat Turner, are lurking in the shadows, eager to kill all whites if only given the opportunity.

With the female Old Fanny, white racism assumes another dimension – not fear, but disdain.

Old Fanny stands in the presence of the seated Aunt Lizzie, frozen forever in her role as inferior servant to her superior mistress. There is not fright her, rather simple reinforcement of the expectation that entry into white society remains beyond Old Fanny’s reach.

The author William Faulkner captures these white “expectations” for the black race in his 1929 master-piece The Sound and The Fury:

Thus was the stereotype of all blacks in the eyes of whites, North and South, from Jamestown to Ft. Sumter. The “3/5th of a person” codified in the 1787 Constitution. A form of chattel, prone to savagery on one hand and incapacities on the other – with a touch of pet-like loyalty thrown in for good measure.

Is it any wonder then that the men of the South, seeking to import this brand of black pestilence into western lands coveted by the men of the North, were met with resistance in 1860?

Is it any wonder that blacks, since being cast bodily on America’s shore, have embraced slogans from “I am a man” to “black lives matter” in search of basic respect long denied?

What is even more fascinating about the photograph itself is the fact that the “history” of the two figures shown has been traced in some detail.

Old Fanny and Aunt Lizzie co-existed within the realm of the Lott household in Brooklyn, NY, during the first half of the nineteenth century. Their stories go as follows:

A nigger is not a person so much as a form of behavior; a sort of obverse reflection of the white people he lives among…a blending of childlike and ready incompetence and paradoxical reliability that tends and protects them it loves out of all reason.. 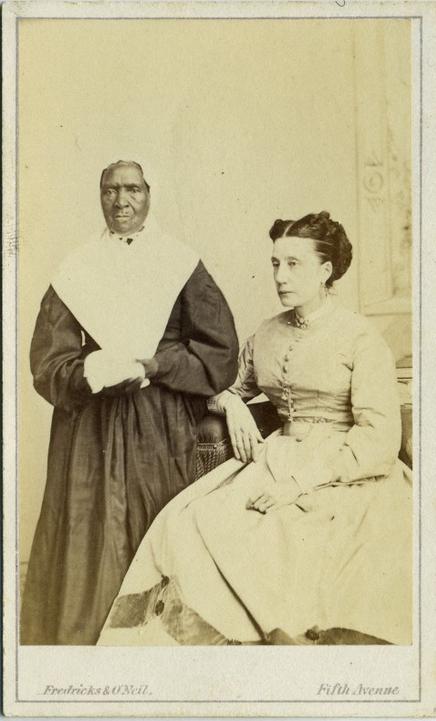 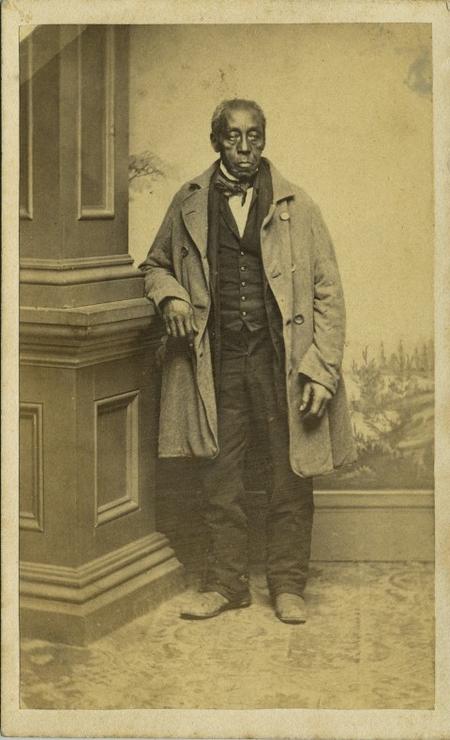